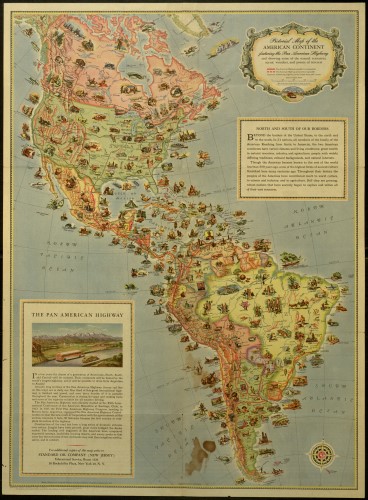 Read the TranscriptClose the Transcript
This is a map by a mapmaker by the name of Jan – j-a-n – Jansson – j-a-n-s-s-o-n – who lived from 1588 to 1664. This was one of the prize maps in my collection, and I’m so glad that it is now in Villanova University’s Special Collections. It is a depiction of the lower portion of the then-known portions of North America, plus the, uh, Central American region, and the very top of the continent of South America. Featured are the great islands of the Caribbean, including Cuba and Hispaniola, and then of course the string of islands that radiate to the east from Hispaniola and circle down to the South American continent, the so-called Windward Islands. In this map we have two compass roses; each is the starting point for a series of lines called rhumb lines, thats r-h-u-m-b. Rhumb lines which could, and in many cases were, used by mariners to plot courses, at least portions of courses, as they navigated from one part of the world to another. Like so many maps of the day it also is rich with, uh, with illustrations – there are ships on the on the, uh, on the sea, there are various creatures – a lizard, a turtle, a snake and others – and circling the cartouche in the upper left-hand corner of this map. Again this map is called Insulae Americanae in Oceano Septentrionali, and it is a prize, prize edition of an early map of the Caribbean.

Read the TranscriptClose the Transcript
This map is a depiction by a mapmaker by the name of Hondius, Hendrikus Hondius, dating, uh, to roughly to 1630 (or) 1631. It is full of activity. Uh, there are galleons. There are large sailing ships. There is a conflict going on between two of them in the Pacific, the so-called Mar-del-Zur. And, uh, there is activity all over. At the very foot of South America, uh, there is a sea creature, a fairly large sea creature belching water – probably not a creature that the average mariner would want to run into. And a similar creature appears on the left-hand side.

If, uh, if one looks through the map at various points where there may be a blank spot, the mapmaker has chosen to fill them in with some interesting animal life or other activity that characterized that part of the world. Uh, obviously, by this date, not too much was known by the interior either of South America or North America, and when one looks up to the North American portion of the map, there is a great deal of blank space, a great deal of geography yet to be discovered.

Read the TranscriptClose the Transcript
This, uh, map, “Terra Firma et Novum Regnum,” is a beautiful map of a portion of Central America and the northwest coast of South America. Uh, at the very top is a representation of the “Mar del Norte,” the Sea of the North, with a compass rose there; and below the Central American depiction is another compass rose and the words “Mar del Zur.” Many people think about, uh, the Americas as separating the oceans, uh, east and west, but in this particular context, uh, the water is to the north, hence “Mar del Norte,” and also to the south, therefore “Mar del Zur.” Whereas portions of Colombia are shown as well as various portions of Peru, the map is wonderful in its depiction of the very mountainous coast, uh, that characterizes that part of South America, and, indeed, goes right down the entire western coast of South America. The, uh, the mountains are, uh, not there to depict specific peaks, but, uh, you get a wonderful sense of just how many mountains there are, and it graphically illustrates, uh, the fact of- of- of the great mount- mountainous character of the, uh, of the area. Another beautiful map by- by Blaeu.

Read the TranscriptClose the Transcript
This map is a map of America by, uh, Ruscelli. He is a 16th Century mapmaker. This is heavily annotated, and so it is fun to look closely at both what is set forth as North America and also what is South America, and to compare the names of that day with those of the, uh, present. So, one can find, by looking closely, Florida. The islands of Cuba and Hispaniola are there, as are literally dozens and dozens of other locations. It’s all a little congested, but it’s beautifully engraved with all the flourishes that Ruscelli was known for, and, uh, again, in pretty good condition for a map that’s more than four-and-a-half centuries old.

Read the TranscriptClose the Transcript
This map is a depiction of the famous Strait of Magellan. This is the Strait that roughly two-hundred years or so before the map was made, Ferdinand Magellan made his famous circumnavigation of the Earth – or I should say, his expedition did, because he didn’t make it. Nevertheless, he was the one who pioneered the- the Strait. And, as you can see, there are innumerable nooks and crannies as you go through it and islands in the midst of it – places where it would be easy to get lost or hide or make a wrong turn. And, in fact, Magellan found to his chagrin that that set of hiding places resulted in the captain of one of the ships of his expedition, deciding that the voyage was not worth pursuing, finding a way to hide while Magellan and the other ships proceeded forward, and then that recalcitrant[1] captain and, uh, ship worked their way back out to the front and headed back to Spain.

The- The map is also fun for its reference to “Terre De Feu,” better known as the “Tierra Del Fuego,” where, at least, there were outcrops of- of fire, whether it was native-created or maybe, uh, secretions of flammable substance. The long-and-short of it is that the sailors thought- the early sailors thought that they saw fire on the island, and that became the way in which it was named: the “Land of Fire” – Tierra Del Fuego.

[1] Recalcitrant can be defined as, “obstinately defiant of authority or restraint” or “difficult to manage or operate.” https://www.merriam-webster.com/dictionary/recalcitrant Accessed 18 Mar. 2021.

Read the TranscriptClose the Transcript
This map is actually a collection of three maps that formed a part of the famous atlas that Abraham Ortelius, a Flemish mapmaker, made in the 16th Century. Uh, it actually includes three sections: one a part of the, uh, connecting tissue between the two continents of North and South America; one showing Florida; and one showing the Peruvian coast. Ortelius was one of the most decent mapmakers and collectors of maps. When he published his atlas, unlike many others who simply stole, uh, the ideas or the maps from someone else and attributed them to themselves, Ortelius always gave credit to the actual mapmaker. Uh, I particularly like the Peruvian coast, and, if you look at that, you’ll see the mountain ranges, of course the mountainous western coast of South America is famous. And this map would have been very useful to the Spanish as they continued their exploration and conquest of the South America and Central American portions of the Western Hemisphere. It’s also illustrated with some wonderful ships at sea, and, uh, communities that probably did not have anything very substantial in them are represented by little castles and somewhat larger structures than are real, uh, at various points in the mountainous Peruvian coast.